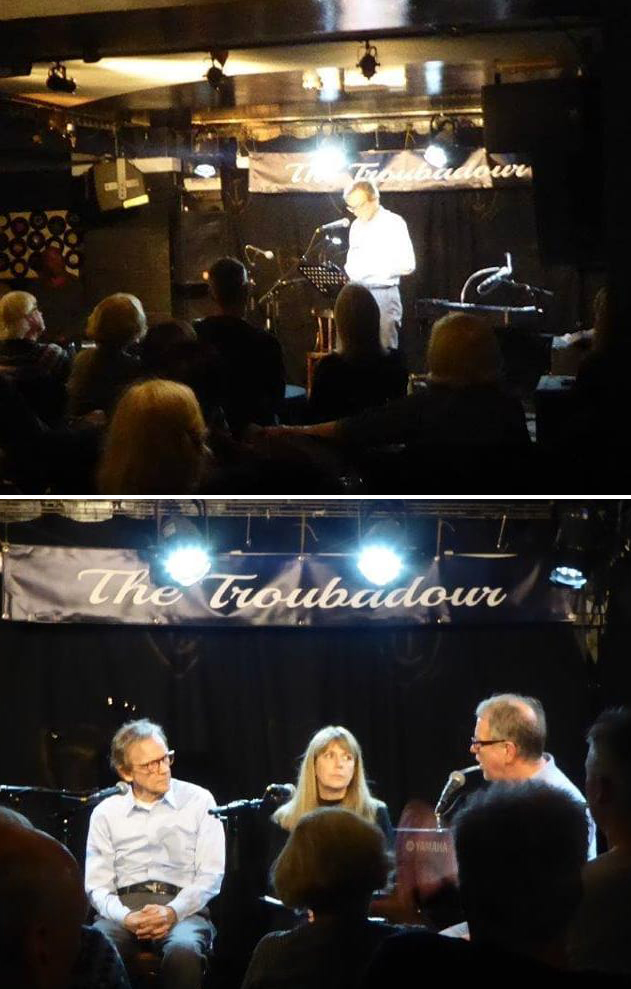 On October 15th, 2018, J. Chester Johnson was one of two featured poets (the other, Elizabeth Powell) at the iconic venue, The Troubadour, in London, England. Primarily known as a famed place for musicians, The Troubadour has over the last two decades become well-known as a special place in London for poetry. J. Chester Johnson had the opportunity to read his verse, principally from his latest book of poetry, NOW AND THEN: SELECTED LONGER POEMS, which was published in 2017. 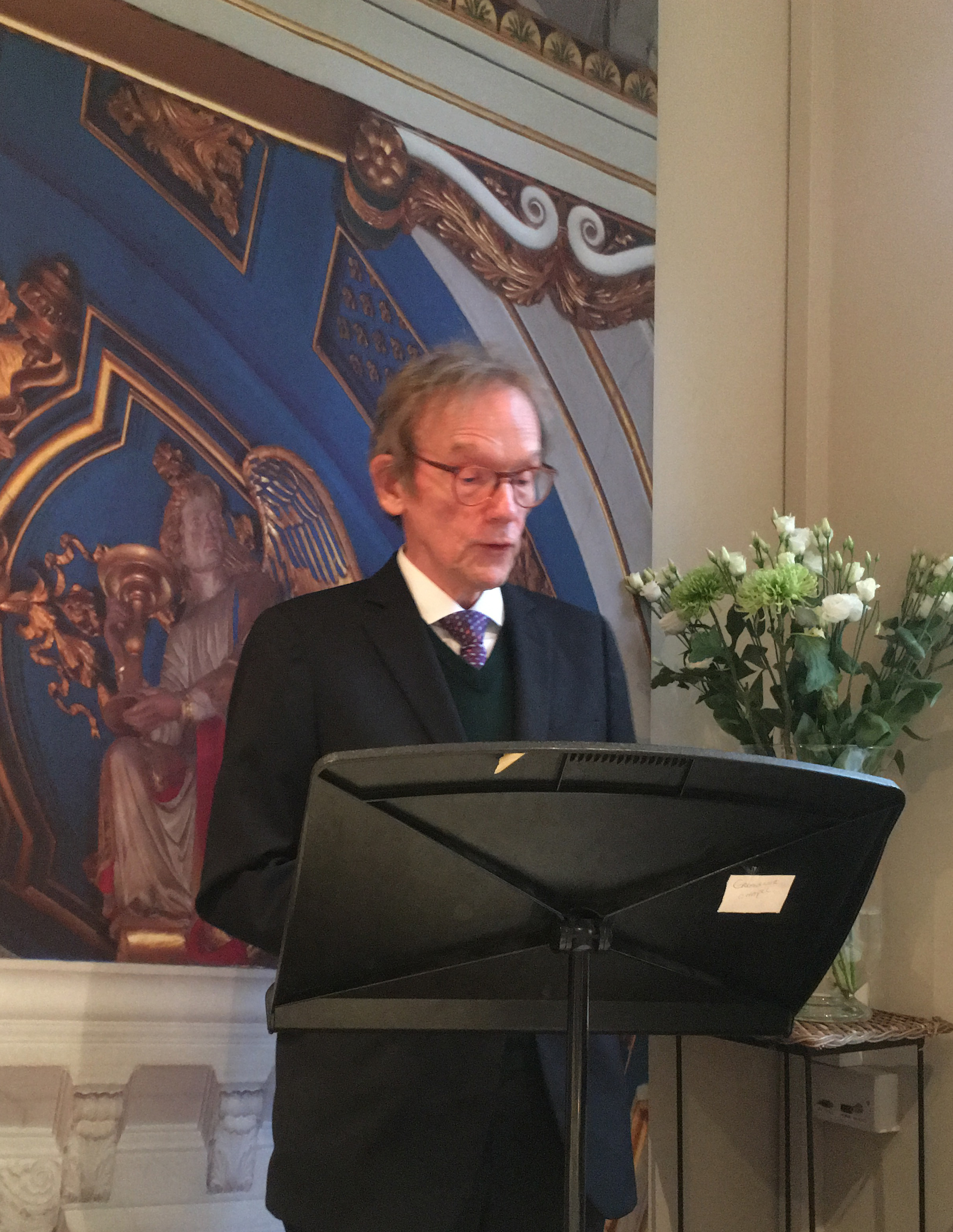 J. Chester Johnson was the featured speaker for “The Feast of the Dedication of Grosvenor Chapel” the afternoon of October 14th, 2018; this Chapel was the church where Dwight David Eisenhower, Commander of the Allied Forces at the time, and his staff routinely worshiped while stationed in England during World War II. This was one of several presentations given at a variety of venues in London and Oxford for his latest book (published in 2017), AUDEN, THE PSALMS, AND ME, the story of the retranslation of the psalms as contained in the American Book of Common Prayer, for which the eminent poet, W. H. Auden, and Johnson were the two poets on the drafting committee for the retranslation. 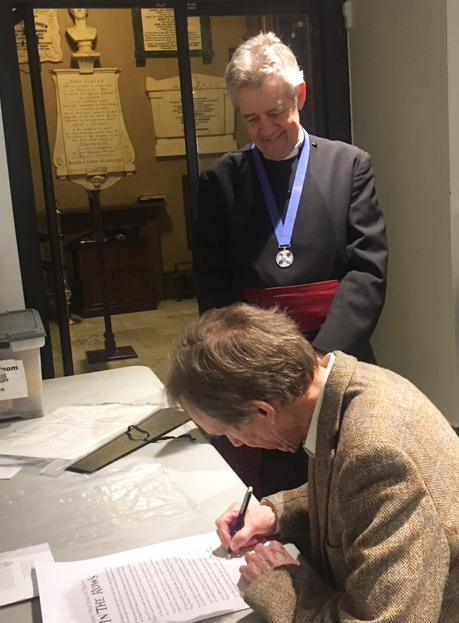 J. Chester Johnson signs his ‘In The Rows’, a poem displayed as part of the celebration for Rev. Canon James G. Callaway, who served for over 34 years on the clergy staff of Trinity Church, located at Wall Street and Broadway in lower Manhattan in New York City. – Photo by Elizabeth Powell 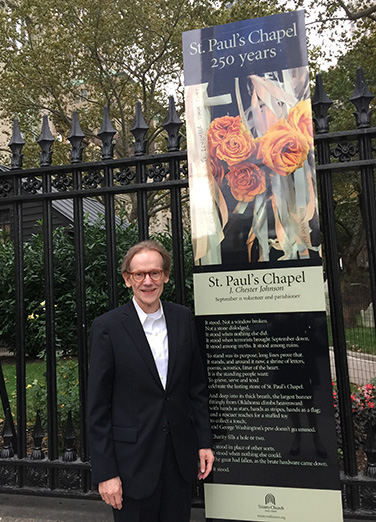 J. Chester Johnson stands beside the all-weather display of his iconic poem, "St. Paul's Chapel," that has been the memento card since 2002 at the Chapel, located in downtown Manhattan, which survived the 9/11 attacks. 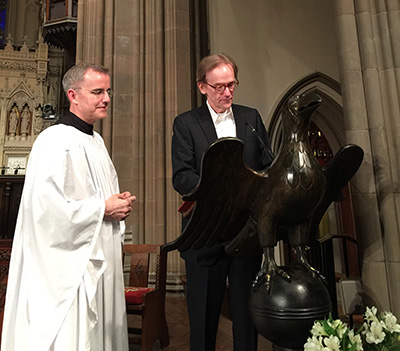 On November 3rd, 2016 at the memorial service for the poet Deborah Danner, the African-American woman who was shot and killed in her apartment by New York City police on Tuesday, October 18th, J. Chester Johnson recited pieces of Ms. Danner's verse. 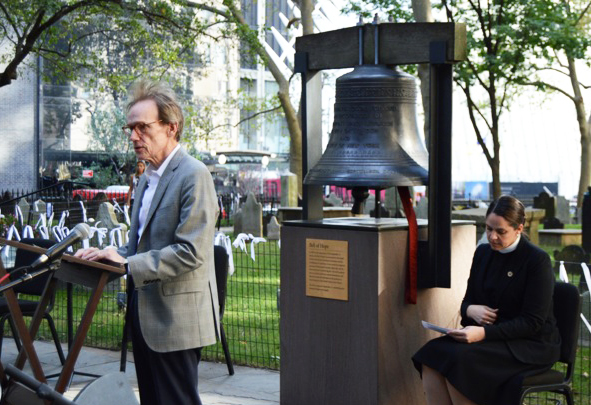 J. Chester Johnson reads his poetry in the "Four Way Books And Friends" program at the main NYU bookstore in New York City. 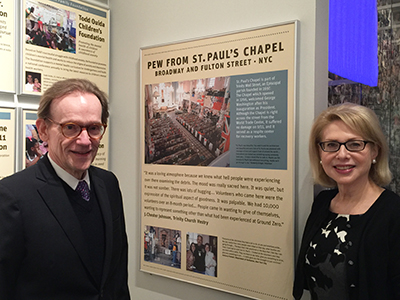 J. Chester Johnson and his wife, Freda, stand beside several of his quotes, associated with the installation of a pew from St. Paul’s Chapel into the 9/11 Tribute Center – both the pew and the quotes have been made part of the Tribute Center at Ground Zero in lower Manhattan in New York City. 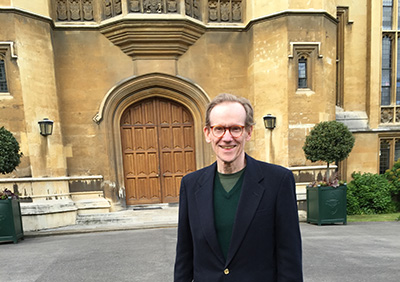 J. Chester Johnson at the main entrance to Lambeth Palace, London, England, where Thomas Cranmer is said to have compiled the first BOOK OF COMMON PRAYER in 1549. J. Chester Johnson was one of two poets (the other being W. H. Auden) on the drafting committee for the retranslation of the Psalms, contained in the current version of the BOOK OF COMMON PRAYER, issued by the Episcopal Church (USA). 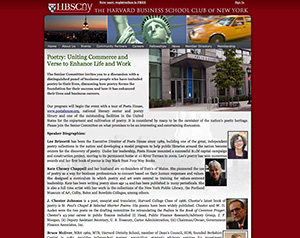 The Senior Committee of the Harvard Business School Club of New York held a discussion with a distinguished panel of business people who have included poetry in their lives, discussing how poetry forms the foundation for their success and how it has enhanced their lives and business careers. It took place on March 4, 2015 at Poets House. Speakers included (listen to audio): Lee Briccetti, Kate Cheney Chappell, J. Chester Johnson and Bruce McEver. To read more about this event or its speakers visit the HBSCNY web site. 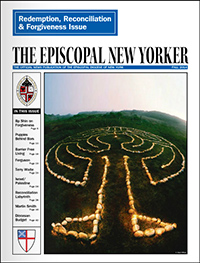 A packed-house symposium on the Elaine Race Massacre, which occurred in the fall of 1919 on the Arkansas side of the Mississippi River Delta and in which more than hundred (and possibly hundreds of) African-Americans were killed, was held at St. Paul’s Chapel in New York City on September 20, 2014. Subsequently, an article entitled, “After Sins of the Fathers, Steps Toward Reconciliation,” was written by Lynn Goswick, associate editor of Trinity Wall Street, and published in THE EPISCOPAL NEW YORKER, fall 2014; the article describes, among other matters, the reconciliation journey that J. Chester Johnson, whose grandfather, Lonnie, joined in the Massacre, and Sheila Walker, whose great-uncles were victims, have taken together to dispel any remnants of adverse human and spiritual consequences from the racial conflagration. The article appears on page 21 of THE EPISCOPAL NEW YORKER. 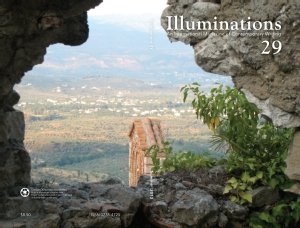 An extensive interview was conducted of J. Chester Johnson by the poet and translator, Ann Cefola; the interview was published in its entirety in the June, 2015 edition of the literary journal, ILLUMINATIONS.
(See further details on my Blog.)

Symposium on The Elaine Race Massacre: The Racial Conflagration That Changed American History
Saturday, September 20th, 2014, 2:00pm-4:00pm at St. Paul's Chapel (See details on Blog)
In the fall of 1919, a brutal race massacre occurred on the Arkansas side of the Mississippi River delta, constituting perhaps the most deadly race massacre in the nation’s history, but also resulting in a Supreme Court decision in 1923 that provided legal underpinnings for the Civil Rights Movement of the 1950s and 1960s. The symposium will examine both the massacre and its aftermath. 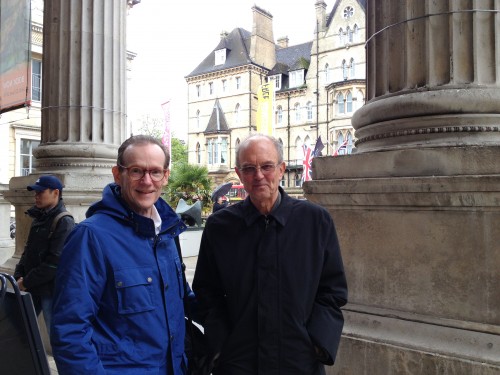 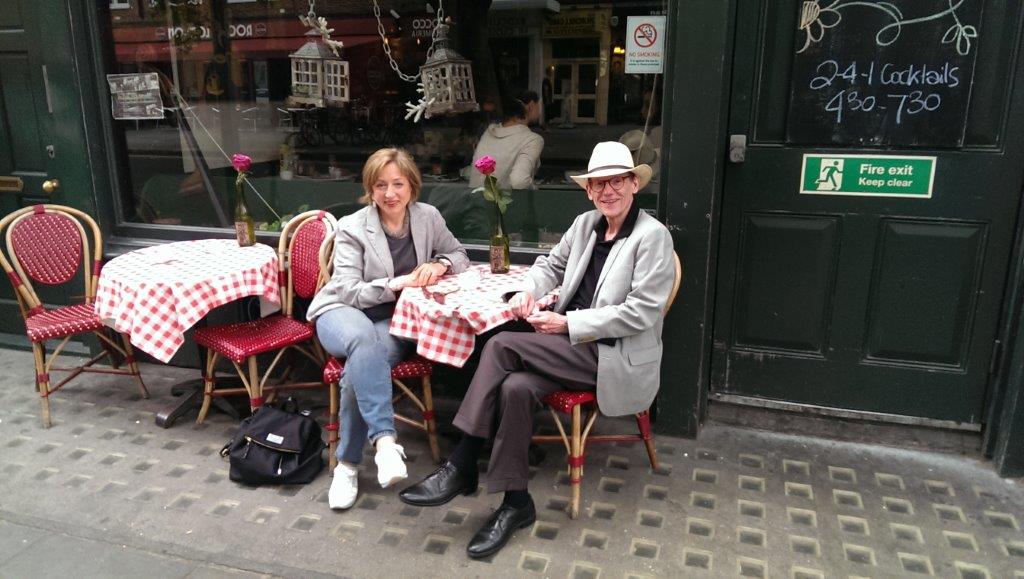 Anne-Marie Fyfe and J. Chester Johnson outside the Troubadour in London. Born in Cushendall in the Glens of Antrim and now living in West London, the poet Anne-Marie Fyfe is the former chair of the Poetry Society (2006-2009); she founded and has run for seventeen years Coffee-House Poetry at the Troubadour.

(Click here to read full poem.)
"In The Rows":, A Poetic Tribute written by J. Chester Johnson to a friend, as it appears in the program employed for the ceremonial celebration of the friend’s thirty-four years of service as an Episcopal priest at Trinity Wall Street, the venerable, iconic church located in lower Manhattan in New York City. 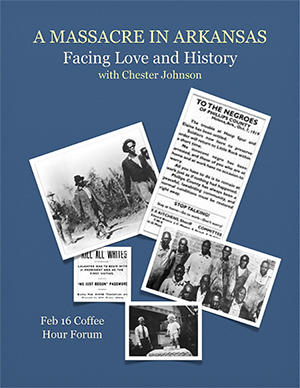 A MASSACRE IN ARKANSAS – Facing Love and History with J. Chester Johnson, February 16, 2014 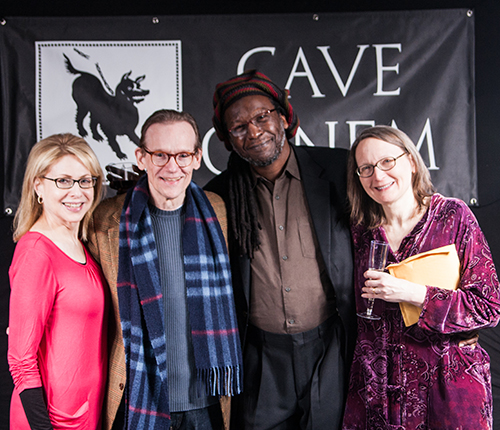 J. Chester Johnson and Freda with the poet Cornelius Eady and his wife, the novelist Sarah Micklem, at a Cave Canem event. 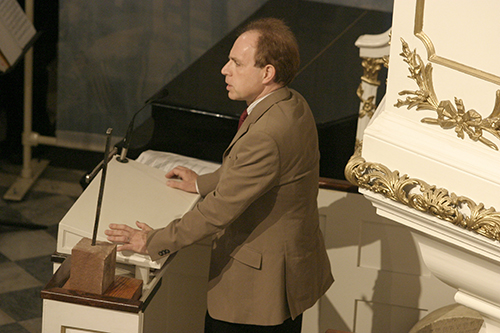 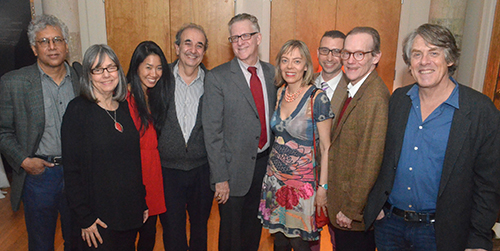 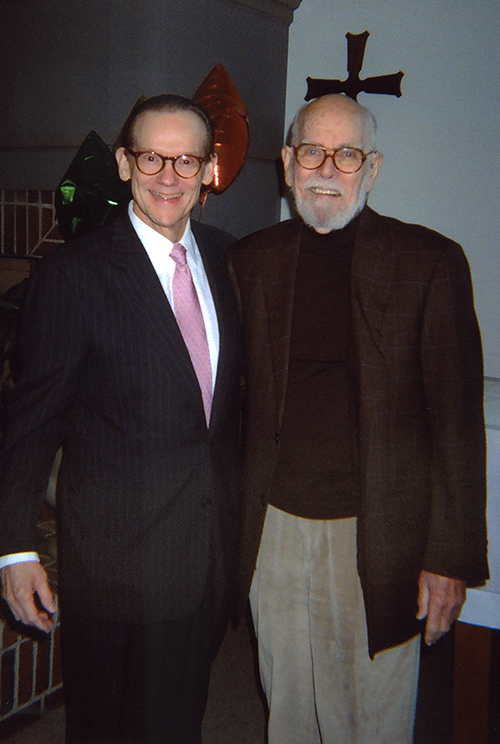 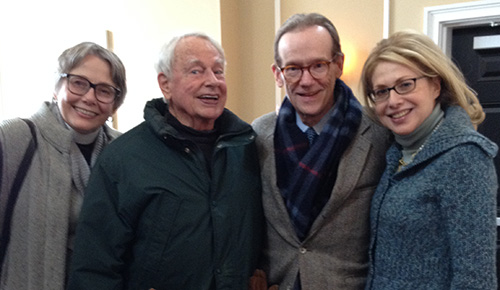 Freda and J. Chester Johnson with the theologian, Barbara C. Crafton, and her husband, Q, after Chester spoke on the Elaine, Arkansas Race Massacre at a Black History Month event in Metuchen, New Jersey. 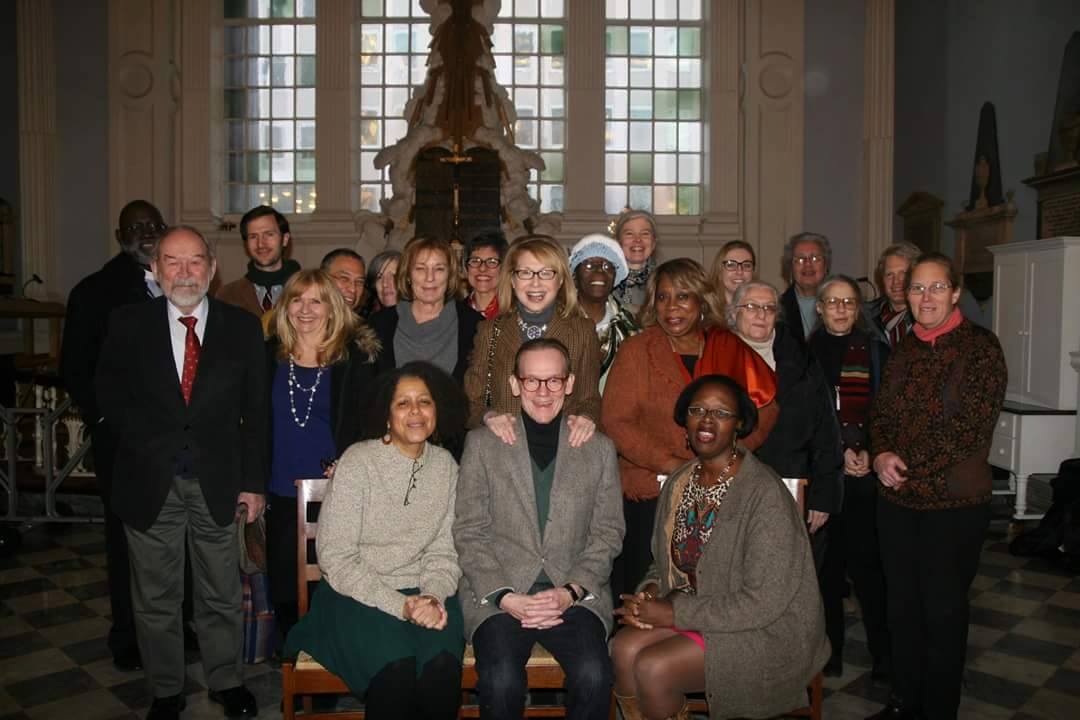 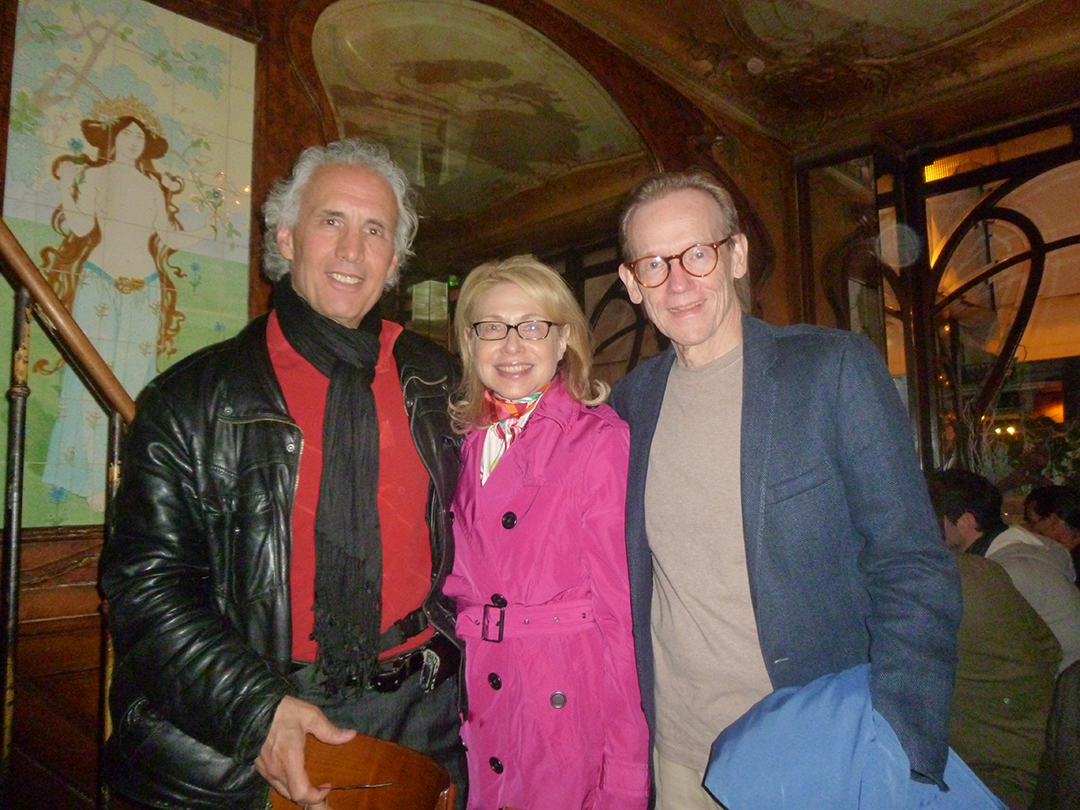 J. Chester Johnson and Freda Johnson in Paris with the writer and activist, Frank Romano.

To search this site, use the box below.

- For a video presentation and discussion of Damaged Heritage with J. Chester Johnson, hosted by The Center for Reconciliation, click here.

- For a video presentation to the Washington National Cathedral, D. C., by J. Chester Johnson on Damaged Heritage: The Elaine Race Massacre and A Story of Reconciliation, click here.

- For a conversation through Trinity Church Wall Street on Damaged Heritage by J. Chester Johnson between Dr. Catherine Meeks and the author, click here.

- For an interview on racial reconciliation between J. Chester Johnson, whose grandfather participated in the Elaine Race Massacre, and Sheila L. Walker, whose forebears were victims, click here.

- For a video presentation to The Carter Center by J. Chester Johnson on his latest book, Damaged Heritage, click here.

- Review of Now And Then: Selected Longer Poems by J. Chester Johnson appears in BigCityLit (Autumn/Winter edition). To read the review, click here.

- Damaged Heritage: The Elaine Race Massacre and A Story of Reconciliation, written by J. Chester Johnson, will be published by Pegasus Books on May 5, 2020. Click here for book cover image and more information.

- Interview by NPR of J. Chester Johnson and Kyle Miller on the Elaine Race Massacre and Memorial. For the interview, click here.

- J. Chester Johnson Presented At The Troubadour And At Grosvenor Chapel Click here for more details.

- J. Chester Johnson discusses Auden, the Psalms, and Me at several locations in London and also in Oxford. Click here for more information.

- Book review of Auden, the Psalms, and Me by the international literary journal, The Arkansas International. Click here for the review.

- Book review of Auden, the Psalms, and Me is posted on the website of the Florida Diocese of the Episcopal Church. Click here to read.

- The magazine, Talisman, Recently Reviewed Auden, The Psalms, And Me. Click here for the review.