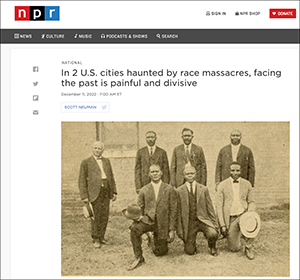 On Sunday, December 11th, the National Public Radio (NPR) published an in-depth article comparing the Elaine and Tulsa Race Massacres, which are estimated to have caused approximately the same number of deaths. The environment surrounding each massacre was quite different, for one involved the destruction of the country’s Black Wall Street in the Greenwood District of Tulsa, Oklahoma, while the other happened in a remote, rural area along the Arkansas side of the Mississippi River Delta to poor Black sharecroppers. The country’s response to the two events has been stark with considerable national attention being paid to Tulsa, but with only a relatively few people in the United States being familiar with the Elaine conflagration. The article attempts to give guidance to the reasons for this remarkable differential in coverage and attention.
Click Here to Read the Article.