On September 29th, 2019, the Elaine Massacre Memorial was dedicated in Phillips County, Arkansas, site of the conflagration; no permanent memorial to the event had previously existed. A series of pieces related to the Memorial in the form of links and attachments are set forth right below the following short description of the Massacre and its important aftermath.

Highlights of the Massacre and Aftermath:

During the Red Summer of 1919 when racial conflict between black and white Americans flared throughout the country, the Elaine Race Massacre stands out as one of the most brutal and extensive racial conflagrations. From early Wednesday morning, October 1st, 1919 into the following weekend, many African-American sharecroppers and family members were murdered. Five whites also died, although two may have been killed by friendly fire.

While whites feared a black insurrection where blacks outnumbered whites by multiples, they also feared the local black sharecroppers’ desire to unionize for improving economic negotiating power; these two factors contributed to the whites’ devastating aggression against the blacks. The largest number of deaths to African-Americans were caused by white federal troops with machine guns, brought into Phillips County allegedly to stop the black revolt. No investigation ever found that local African-Americans planned or executed an insurrection.

At the end of the killing spree in Phillips County by local whites, by white vigilantes from neighboring communities and states, and by the federal military, whites then relied on the torturing of black witnesses to evince the right responses supportive of an untrue proposition that a broad-based black rebellion had existed, which would be the only theory heard in the local courts at that time. No whites were charged, while seventy-four sharecroppers were found guilty of crimes ranging from first-degree murder to “night riding”. All-white juries often deliberated for no more than two minutes in finding blacks guilty.

Out of the Massacre and associated local court proceedings emerged a case, Moore v. Dempsey, that made its way to the U. S. Supreme Court, which found in 1923, in an opinion written by Oliver Wendell Holmes, that federal courts could overturn local and state criminal court proceedings which were unfair. This judgment by the U. S. Supreme Court put teeth in the 14th Amendment (equal protection under the law) for the first time since its enactment in 1868.

A significant brick in the Civil Rights road had been put in place. For his legal strategy that led both to the U. S. Supreme Court decision and to freedom after five years for all seventy-four sharecroppers found guilty following the Massacre, the black Little Rock attorney, Scipio Africanus Jones, will someday be recognized for the American hero he is.

I would like to share the following pieces. The dedication of the Elaine Massacre Memorial was held on the afternoon of September 29th, 2019, one day in advance of the Massacre’s centennial. While many people locally and beyond participated, David P. Solomon and the Solomon family, long-time residents of Phillips County, Arkansas, led efforts that resulted in the creation of the Memorial.


2. Pictures of the Elaine Massacre Memorial
Photos by David Gruol

3. NPR "Here and Now" Interview: Aired on September 12, 2019, Robin Young of "Here and Now" interviews Dr. Kyle Miller and me. Dr. Miller lost four ancestors in the Massacre, and my maternal grandfather participated in the conflagration.

4. Two Articles of Interest (combined in one document): "In a Small Arkansas Town, Echoes of a Century-Old Massacre," The New York Times, July 25 2019, and "Arkansas Group Planned Monument to Racial Unity; It Isn't Going as Planned," The Wall Street Journal, September 14, 2019.

In May, 2020, a new non-fiction book, DAMAGED HERITAGE: The Elaine Race Massacre and A Story of Reconciliation, will be published by Pegasus Books. A meaningful part of this book, which I wrote, consists of the journey, over the last six years, that Sheila L. Walker, who authored the Foreword, and I have shared to achieve racial reconciliation and authentic friendship in which our respective spouses and families have become an integral part. Sheila had family members victimized during the Massacre, and my grandfather participated in the conflagration.

For the book, the Massacre serves as a backdrop for my commentaries on race, racism, and reconciliation; in particular, the book discusses the reasons that racism repeats itself in this country from generation to generation, including the roles that both white damaged heritage and white filiopietism have played in the repetitive adherence of America to racism over several centuries to the present. It also offers approaches, including the lessons learned through racial reconciliation by Sheila and me, to end the vicious, dehumanizing (for both blacks and whites), and continuous racial subjugation. You may view the book cover below. 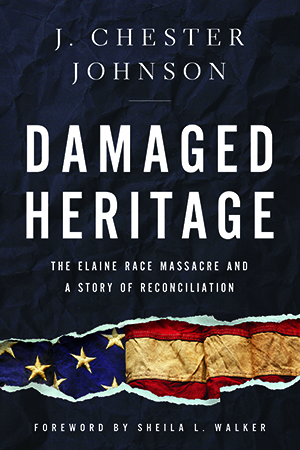 Review by Melinda Thomsen of Now And Then: Selected Longer Poems 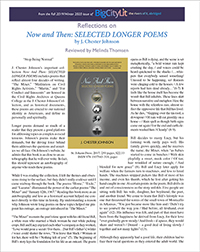 Set forth below is a review written by Melinda Thomsen on Now And Then: Selected Longer Poems, which was published in 2017 by St. Johann Press. Johnson has said about this volume: “This is the closest piece of writing to an autobiography as I have ever written. The subject matter and timbre of the language represent issues that have occupied my art for the better part of my life.”
Click the following link to read full review. Now_and_Then_Flier_final_w_revisions.ital_1-3-20.pdf