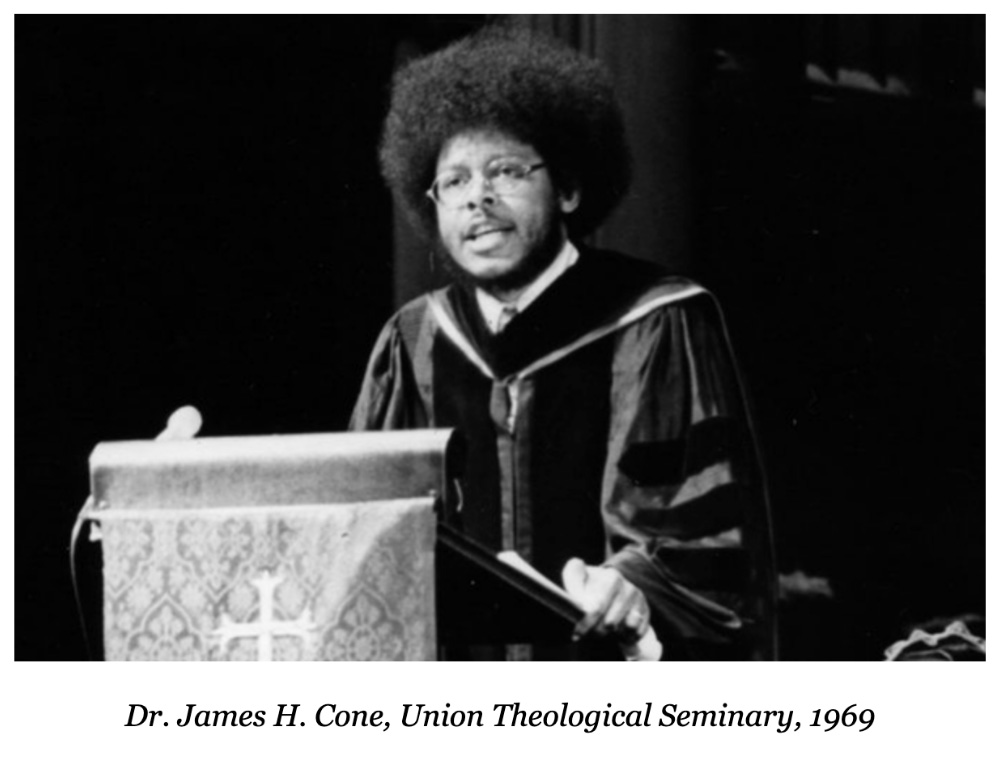 The summer of 2013 proved especially consequential for me, occasioned by a series of four private lunches with Dr. James H. Cone, author of Black Theology & Black Power, a book that has, since its release, carried the distinction as “the founding text of Black liberation theology.” To Cone, long-time distinguished professor at Union Theological Seminary, the gospel of Christianity had been hijacked and distorted by “white, Euro-American values.”

The Spring 2022 issue of American Book Review includes a review of Damaged Heritage by Robert Whitaker. I have received permission to share this article with you.

As the 1619 Project reminds us, our nation's damaged heritage stretches back more than four centuries, to the moment that the first Africans were brought to the New World to labor under the yoke of slavery, and here we are today, still in need of protests that proclaim, "Black Lives Matter," and still hearing of resistance to teaching this history in our schools. Readers of J. Chester Johnson's aptly titled book, Damaged Heritage: The Elaine Race Riot and a Story of Reconciliation, will recognize that although his story is autobiographical, he serves as an Everyman, telling of a need for us all to confront this past, which so infects our present. His deep friendship with Sheila Walker serves a model for moving forward with a shared understanding of history.

This is a book about escaping from the talons of our damaged heritage, so infused with racism, violence, and a societal narrative that turns a blind eye to such facts. Johnson has a particular heritage that haunts him. After his father died when he was not yet two, he spent his preschool years in Little Rock with his grandparents. His grandfather Lonnie doted on him, and some of his earliest memories are of sitting in Lonnie's lap. Yet, years later, he would come to understand that Lonnie had been a member of the Ku Klux Klan, donning the white sheet on many nights, and that he had been a member of the mob that killed Black sharecroppers in Phillips County, Arkansas, in 1919.

In an imaginary letter to Lonnie, Johnson writes: [End Page 85]

"While I have unreservedly written here and accepted that you are part of me, you cannot be in fact and in sum, for consciously and unabashedly, I abhor that part of you who pursued a massacre of blacks, you who could mortify, terrorize, burn, or lynch, and then claim the rightness of it all with an allegiance to the proposition of superiority for a white coterie."

Although it is always difficult to know why one person retains the values of the culture they grew up in while another breaks from those values, there was an early experience in Johnson's life that prepared him for the latter course. In 1949, when his mother moved their family to Monticello, his backyard was adjacent to a field that, on the opposite side, was home to Black families. There, in this no-man's land, they played pick-up games of baseball with young Chester, the only white child, and yet everyone also knew the rules: his Black friends would never be invited into his home, and the opposite was true too.

Those friendships proved fleeting once Chester developed new friends at the all-white elementary school, and that remained true for the rest of his youth. However, upheaval to Arkansas's Jim Crow world came in 1957, when nine Black students integrated the Little Rock High School, with white mobs hurling insults and threats as they entered the school under the protection of federal troops. Johnson's early friendship with Black children prompted him to begin to separate himself-at least in his mind-from those who would countenance such hate.

Chester went off to Harvard, but after the Summer of 1964, when Freedom Riders went to Mississippi to register Black voters, he dropped out and returned to Arkansas. He traveled widely, occasionally sleeping in his car, intent on better understanding the South and its residents. At the end of that journey, he often spoke with an older Black man who lived in the woods outside Monticello, the two of them drinking whiskey together. After earning a degree from the University of Arkansas, he spent the turbulent year of 1969 teaching at a Black school in Monticello and running for mayor. He knocked on every door in town during that effort, which, when accompanied by a Black friend, provided him the opportunity to be with the Black community in their homes. [End Page 86]

He lost that election, having narrowly escaped a beating by the local "peckerwoods" who didn't cotton to his teaching at the local Black school and, having "foresworn being a white Southerner, burdened with its persona from a damaged heritage," he moved to New York City. There he attained professional success as a "public finance specialist," serving as Deputy Assistant Secretary of the US Treasury Department under Jimmy Carter.

In 2008, Johnson was selected by the Episcopal Church to write the Litany of Offense and Apology for a National Day of Repentance, which served as a formal apology by the church for its role in transatlantic slavery. While working on that project, he read Ida B. Wells's account of The Arkansas Race Riot (1920), and this was the moment when his damaged heritage came fully to light.

While there has been a great deal of attention during the past year to the Tulsa Race Massacre in 1921, the Elaine Massacre is much less well known, and only in recent years has it entered the history books.

That fall, sharecroppers in the southern part of Phillips County began organizing a union to wage a legal fight for their fair share of the revenue from the cotton crop that year. Late in the evening of September 30th, they were meeting in a roadside church in Hoop Spur, a few miles north of Elaine, when a car pulled up outside and cut its lights. There was an exchange of gunfire, and when the smoke cleared, the church was riddled with bullet holes and a white security agent for the Missouri-Pacific railroad was lying dead in the road next to his Model T. The next morning, posses from Helena descended on the area, shooting sharecroppers hiding in the Govan Slough; next, mobs from outside the county came and began a more indiscriminate killing of Blacks in the area; and finally, Army troops from Little Rock arrived, chasing sharecroppers into the canebrakes and, as white newspapers reported, the rat-a-tat­tat of their machine guns filled the air.

What Johnson now understood was that the grandfather he adored, who in 1919 was working for the Missouri-Pacific Railroad, stationed in nearby McGeHee, had gone to Hoop Spur and participated in the killing of the Black sharecroppers.

His reconciliation with Sheila Walker crossed this vast historical divide. Her great grandmother, Sallie Giles, and her two sons, Albert and Milligan, were in the church the night it was shot up. The next morning, as a Helena [End Page 87] posse descended on their cabin, Albert and Milligan fled to the slough to hide. Albert was shot in the head, the bullet passing through his skull, and fifteen-year-old Milligan was shot in the face. Remarkably, both survived, and then came more white violence for the Giles family: the two were imprisoned for having participated in what white authorities described as a "conspiracy" by Blacks to kill the plantation owners and take over their lands. Albert was condemned to die in the electric chair, but eventually was saved from that fate by the extraordinary legal work of Scipio African us Jones, a case that led to a Supreme Court decision in Moore v. Dempsey that served as a legal foundation for the Civil Rights movement.

Sheila Walker passed earlier this year, and one wishes that there was a biography of her life that could be read alongside Johnson's. Hers is a story of a family that continued to suffer from our unequal society, Walker and her siblings growing up desperately poor in a crowded Chicago apartment. In the 1960s, as a member of the Student Non-Violent Coordinating Committee, Walker participated in protests, sit-ins, and other Civil Rights struggles. While she eventually escaped the poverty of her youth, several of her siblings did not, their lives ransacked by drugs.

Much like Chester Johnson, she never heard anyone speak directly about the Elaine Massacre, although in 1973 her grandmother Annie, while telling of living in Phillips County, began to cry hysterically while describing a night when the Hoop Spur church had been shot up. Something awful had happened to her family, but it wasn't until she read Grif Stockley's 2001 book Blood in Their Eyes and other accounts of the massacre that this history became known to her.

When Chester Johnson and Sheila Walker first spoke, they took pains to come to a common understanding of the history of the Elaine Massacre, which was essential to their subsequent reconciliation. There had long been a white version, which in essence told of a Black riot that had been put down by white authorities with only fifteen to twenty Blacks killed, and there had long been a Black version, which told of a massacre of one hundred or more Blacks, and as they had both read everything they could about the subject, they both agreed that the latter was true.

From there, an extraordinary friendship developed. The two talked regularly on the phone and they spoke together at multiple public events, where [End Page 88] those in the audience could see the affection and respect they had for each other. Sheila Walker was a person of extraordinary grace, who could speak eloquently about Black Liberation and the need for a national reconciliation in this country, and as Johnson relates, it was she who counseled him that he needed to forgive his grandfather Lonnie for what he had done in 1919.

Johnson, who has won praise for his books of poetry, is a gifted writer. Damaged Heritage is part memoir, part history, and part essay on racism, all tied together by a story of a friendship that transcended the racial gulf that so regularly plagues our country. Throughout, he reflects on our damaged heritage as a nation and how it remains so difficult for our society to confront this heritage.

This book provides a model for doing so, starting with the teaching and acceptance of a shared narrative of our country's history, and then calling on our better selves to foster a national reconciliation.

Robert Whitaker is the author of On the Laps of Gods: The Red Summer of 1919 and the Struggle for Justice that Remade a Nation (2008).