Exclusive: On Working with W.H. Auden on The Psalms by J. Chester Johnson 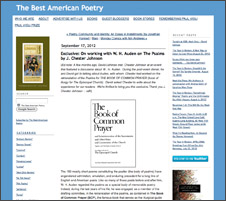 (Ed note: A few months ago, David Lehman met Chester Johnson at an event that featured a discussion about W. H. Auden. During the post-event dinner, he and David got to talking about Auden, with whom Chester had worked on the retranslation of the Psalms for THE BOOK OF COMMON PRAYER
(book of liturgy for The Episcopal Church). David asked Chester to write about the experience for our readers. We're thrilled to bring you this exclusive. Thank you J. Chester Johnson -- sdh)

The 150 mostly short poems constituting the psalter (the body of psalms) have engendered admiration, emulation, and enduring precedent for a long line of English and American poets. Like so many of those poets before and after him, W. H. Auden regarded the psalms as a special body of memorable poetry. Indeed, during the last years of his life, he was engaged, as a member of the drafting committee, in the retranslation of the psalms, as contained in The Book of Common Prayer (BCP), the famous book that serves as the liturgical guide for The Episcopal Church (USA), which had, at the time, authorized a complete overhaul of the entire book.

While the form for the psalms evolved through our language into different applications, their original construction influenced the direction of our verse. For example, though the ancient Hebrew ear apparently enjoyed more truncated lines and fewer cadences, the English-American ear, as a general matter, extrapolated verse structure into longer lines and more cadences.

Not withstanding many other adaptations, including major adjustments to subject matter and tone, the model of the psalms has persisted to effect a stylistic reference point among English and American writers of verse – in innumerable cases, no doubt, without the literary practitioner’s conscious knowledge of the association.

Read full article(back to the top) 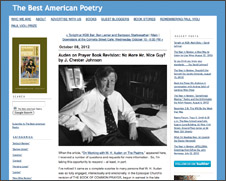 When the article, "On Working with W. H. Auden on The Psalms," appeared here, I received a number of questions and requests for more information. So, I’m taking this opportunity to respond – at least, in part.

I’ve noticed it came as a complete surprise to many persons that W. H. Auden was so fully engaged, intellectually and emotionally, in the Episcopal Church’s revision of THE BOOK OF COMMON PRAYER, begun in earnest in the late 1960s. While a portion of his views on the subject was included in the article, associated material by and about Auden on the revision project is also contained in the final pages of Later Auden, the most recent biography by Edward Mendelson, Auden’s literary executor and principal biographer. To receive a little more flavor of the intensity of Auden’s perspective toward the subject, add the following excerpt from one of his letters:

"What has happened over the last few years has made me realize that those who rioted when Cranmer introduced a vernacular liturgy were right. When this reform nonsense started, what we should have done is the exact opposite of the Roman Catholics: we should have said 'Henceforth, we will have the Book of Common Prayer in Latin.' (There happens to be an excellent translation.)"

These views were further clarified and emphasized in the considerable communication that exists on various aspects of the revision process between Auden and Canon Charles Guilbert, who was, at the time, the Custodian of THE BOOK OF COMMON PRAYER of the Episcopal Church. The basis for Auden’s fundamental aversion to the revision can be summed up, I believe, in this thoughtful and quite eloquent excerpt from a letter, dated March 19th, 1968, to Guilbert:

"We had the Providential good-fortune, a blessing denied to the Roman Catholics, that our Prayer Book was compiled at the ideal historical moment, that is to say, when the English Language was already in all essentials the language we use now – nobody has any difficulty understanding Shakespeare’s or Cranmer’s English, as they have difficulty with Beowulf or Chaucer – at the same time, men in the Sixteenth and Seventeenth centuries still possessed what our own has almost totally lost, a sense for the ceremonial and ritual both in life and in language."

Read full article(back to the top) 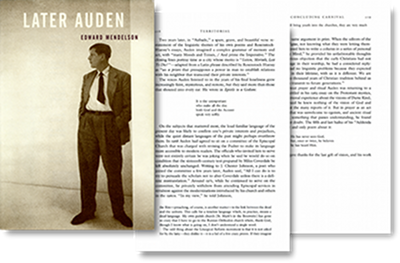 Copyright © 1999 by Edward Mendelson.
Excerpts and book cover, including photo, from Later Auden, published by Farrar, Straus and Giroux

(back to the top) 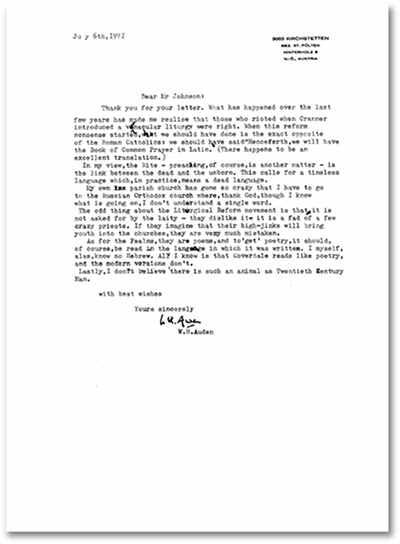 (back to the top)

Exclusive: On Working with W.H. Auden on The Psalms by J. Chester Johnson

A letter from W.H. Auden to J. Chester Johnson