Several works of J. Chester Johnson have been included in the Civil Rights Archives at Queens College, City University of New York. These works currently constitute the J. Chester Johnson Collection within the Civil Rights Archives. His work joins, among others, the library of James Forman, one of the civil rights leaders for freedom summer, a project that brought Andrew Goodman, a student from Queens College at the time, to Philadelphia, Mississippi, where he, James Chaney and Michael Schwerner met their deaths at the hands of local segregationists. Johnson’s poetic pieces included in the Archives are: 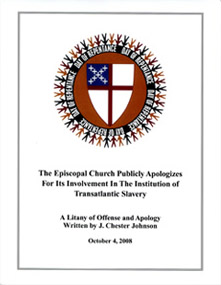 1. The Day of Repentance - Cover Art and Release Courtesy of The Episcopal Church 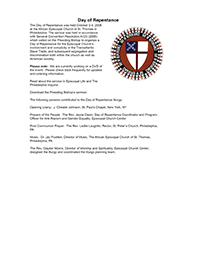 2. Characterized by Green Mountains Review as “groundbreaking,” the article, “Evanescence: The Elaine Race Massacre," explores the massacre of African-Americans during the fall of 1919 in Phillips County, Arkansas along the Mississippi Delta. The massacre, whose murderous and legal importance has been conspicuously overlooked by American history, is exposed by Johnson, including his own grandfather’s likely participation in the massacre and the feral racism that led to one of the country’s deadliest assaults against African-Americans. 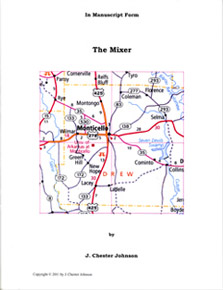 3. For the school year, 1969-70, Johnson decided to return to the South and teach at an African-American public school in Monticello, a small town located on the cusp of the Mississippi Delta in southeast Arkansas and the place he had lived from age four to eighteen. It was the final year before integration of the public education system, and he taught the sixth through the twelfth grades; for a white male of twenty-five, reared in the midst, this period of pedagogy and proximity came as a chance to find people he’d known but not found. Johnson also entered the race for mayor there. The Mixer is a poignant verse story rising out of these two, related experiences. By the way, he lost the election.

For Conduct And Innocents 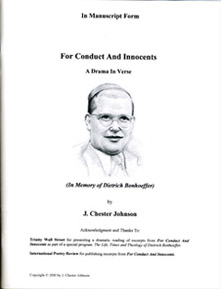 4. For Conduct And Innocents

4. A drama in verse, this poetic play celebrates the life of Dietrich Bonhoeffer. A well-known theologian in Germany while still in his twenties, Bonhoeffer struggled for years to overthrow Hitler while most of the country and much of Europe crumbled under the weight of Nazism. Executed by the Hitler regime two weeks before the liberation by the Americans of Flossenburg, the concentration camp in which Bonhoeffer was imprisoned, he became a seminal martyr, one that inspirited the revival of Western civilization after World War II. The play tracks the three years of Bonhoeffer’s life leading up to his arrest. 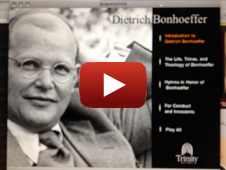 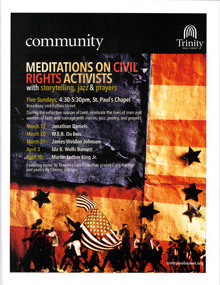 6. This long poem expands on the verse for Martin Luther King Jr., contained in Meditations On Civil Rights Activists. Relying on a variety of verse tools, such as quatrains and traditional rhyme, free verse and ‘elastic rhyme’, the piece references back to events and personal experiences that helped to shape King’s spirituality, leadership and monumental influence on America and its future.

For Conduct And Innocents

a drama in verse
by J. Chester Johnson

“It is certainly a most ambitious and significant work”


“A labor of love, obviously, tackling an immense subject. But that’s what Bonhoeffer staked his whole life on too. I can see the skill...and the fluency of the verse, making ‘speeches’ sound like real ‘speech.’ Quite an achievement.”


“I love the Bonhoeffer play...The whole dynamic of moral indignation and spiritual ardor, combining and recombining there in endless variation – a quality the lyrics also possess – made the reading fascinating.”


“What an amazing undertaking – so impressive in scope, intent and understanding. This must have taken years of energy...There are many extraordinary moments in this work, but I keep returning to the phrase, ‘was it simply the allure of calm,’ that Bonhoeffer says in Act V. I think of that ‘allure of calm’ and how it functions in the world...Elastic rhyme! That’s a perfect term for...stretching and contracting language.”


“It is dense, it is wise, it is enthralling as it moves towards its tragic denouement. The verse has a lovely plain spoken texture that plays off effectively against the horrific circumstances it is set against.”