The signature poem for St. Paul’s Chapel & Selected Shorter Poems had already become iconic before this volume was published as a result of the poem being the memento card for years for the thousands of weekly visitors and pilgrims who came to Ground Zero’s St. Paul’s Chapel, which served as the relief center for recovery workers after the 9/11 terrorists’ attacks and where J. Chester Johnson volunteered. Within its pages, the reader discovers nearly forty years of 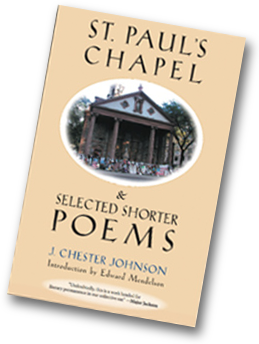 Also available at St. Johann Press
or at your favorite bookstore.

composition of short verse, ranging from the enthrallment of the poet’s youth to a more balanced and consequential viewpoint found in the language of a maturing poet. St. Paul’s Chapel & Selected Shorter Poems is a story of passage and an impactful journey with extraordinary verse accenting the odyssey in all its abundant and distinctly American phases – from the Mississippi River Delta and the Civil Rights Movement of Johnson’s youth to the horrific effects of the 9/11 terrorism that he experienced firsthand with much to be read in penetrating and exquisite short poems falling in between. As one critic has eloquently stated, the book’s “elements cohere in a unified vision. In the phrase of the old Baedeker guides, these landscapes are ‘worth the journey.’” 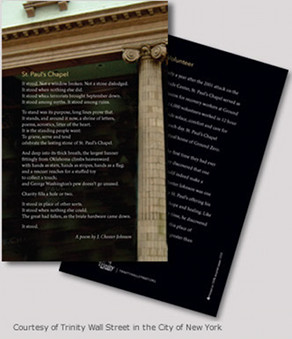 "These poems, like all authentic ones, bear witness to a truth.”


“With J. Chester Johnson, objectivity and passion coexist naturally. And language, rather than abstracting experience, breathes a direct connection to our tragedies, pettiness, bones and sweat and exaltation.”


“My reaction to (Johnson’s) work, wholehearted as it was, did not come near to envisioning the scope and quality, the prodigality of (Johnson’s) accelerating career.”


“Wherever my gaze fell I read good lines.”


“Chester Johnson’s stunning book of poems, St. Paul’s Chapel & Selected Shorter Poems, is a powerful collection. Johnson writes with such elegance and honesty that his poems are riveting, hard to put down. I recommend this book wholeheartedly.”