In a Small Arkansas Town, Echoes of a Century-Old Massacre 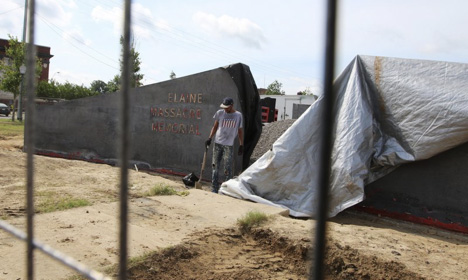 In this June 15, 2019, photo, a man works near a monument under construction honoring victims of the Elaine Massacre that sits across from the Phillips County courthouse in Helena, Ark. The Elaine Massacre Memorial is set to be unveiled in September.

ELAINE, Ark. (AP) — J. Chester Johnson never heard about the mass killing of black people in Elaine, a couple hours away from where he grew up in Arkansas. Nobody talked about it, teachers didn’t mention it in history classes, and only the elderly remembered the bloodshed of 1919.
He was an adult when he found out about it. By then, his grandfather, Alonzo “Lonnie” Birch, was dead — perhaps taking a secret to his grave.
Johnson believes Birch took part in the Elaine massacre. And now he’s bent on telling the story of one of the largest racial mass killings in U.S. history, an infamous chapter in the “Red Summer” riots that spread in cities and towns across the nation.

“I feel an obligation,” said Johnson, who is white. “It’s hard to grow up in a severely segregated environment and for it not to affect you. If you don’t face it and deal with it in various ways, it becomes undiscovered.”
___
EDITOR’S NOTE: Hundreds of African Americans died at the hands of white mob violence during “Red Summer” but little is widely known about this spate of violence a century later. As part of its coverage of the 100th anniversary of Red Summer, AP will take a multiplatform look at the attacks and the communities where they occurred. https://www.apnews.com/RedSummer
___
Johnson, who now lives in New York City, is co-chair of a committee overseeing construction of a memorial honoring those killed in 1919. He and others are hoping the structure, being built in a park across from the Phillips County Courthouse about a half-hour drive from Elaine, will bring attention to the massacre. Others say plans for a monument are a folly — starting with its location — and want commemoration efforts to focus instead on reparations to account for what they say was theft of black-owned land in the wake of the killings.

“It was literally a war on this area. People wanted the property that was almost all black-owned,” said Mary Olson, who is white. She is president of the Elaine Legacy Center, a red-brick community center that works to preserve the area’s civil rights history. It bears the sign, “Motherland of Civil Rights.”

The violence unfolded on the evening of Sept. 30, 1919, as black sharecroppers had gathered at a small church in Hoop Spur, an unincorporated area about 2½ miles north of Elaine. The sharecroppers, wanting to be paid better and treated more fairly, were meeting with union organizers when a deputy sheriff and a railroad security officer — both white — arrived.

Fighting and gunfire erupted, though it’s still not clear who shot first. The security officer was killed and the deputy wounded.
White men frustrated that the sharecroppers were organizing went on a rampage. Over several days, mobs from the surrounding area and neighboring states killed men, women and children.

More than 200 black men, women and children were killed, according to the Equal Justice Initiative, a Montgomery, Alabama-based nonprofit that has documented more than 4,400 lynchings of black people in the U.S. between 1877 and 1950. Five white people were killed. Hundreds of black people were arrested and jailed, many of them tortured into giving incriminating testimony. Some were forced to flee Arkansas and, according to the Legacy Center, had their land stolen.

Johnson said his grandfather, Alonzo “Lonnie” Birch, was a member of the Ku Klux Klan and worked for the Missouri Pacific Railroad, the same company that employed the railroad security officer who was killed at the Arkansas church where the black sharecroppers had gathered to organize. Once the violence started, Johnson said, railroad officials urged workers to join the fighting. He said his grandfather likely responded to the call.

Narratives about the killings differ and records are not easy to find, said Brian Mitchell, an assistant professor of history at the University of Arkansas-Little Rock. “You have to understand that everybody that had some degree of power in the state was a part of the process of the massacre, so the people who would control all the records are actively suppressing the records,” Mitchell said.
Some residents think the death toll is highly exaggerated.

Poindexter Fiser, the mayor of Elaine from 1985 to 2007, said the accounts of a massacre are “somebody trying to make something out of nothing much to talk about.” Fiser, who is white, said his late father-in-law put the number of those slain at only “about 25 people.”

Kyle Miller, director of the Delta Cultural Center in Helena-West Helena, Arkansas, said for many years, the violence “was not really acknowledged ... it was something that was only talked about behind closed doors.” Miller is a descendant of the Johnston brothers, four wealthy, black siblings who he said were pulled off a train on their way back to Helena after a hunting trip and killed during the massacre.

“I’m really hoping (the memorial) is going to spark some conversations. That people will look at it and begin to ask questions and be able to learn some history of our community,” Miller said.

The memorial is set to be unveiled in September.

Not everyone supports it. Members of the Legacy Center say the monument belongs in Elaine.

White and others with the center said any commemoration efforts should have some focus on the theft of black-owned land. Some residents are calling for descendants of the victims to receive compensation for what their families lost.

Miller and other memorial organizers say Elaine doesn’t have enough resources to sustain what they envision will become a civil rights tourist destination. And to them, the massacre story is bigger than Elaine: The Phillips County Courthouse in Helena was where hundreds of black men were jailed and tortured following the violence.

The effects of the violence and aftermath endure today. Elaine is still highly segregated: White residents live predominantly on the south side and black residents on the north side. About 60 percent of its 527 people are black.

White said he welcomes efforts to learn about the massacre but questions who gets to tell the story and who benefits from sharing it.

“One hundred years later, it’s the same old game, just a different day,” he said, reflecting on the disparity between those that hold power in Phillips County and the poor black residents of Elaine. “It’s hate in this town ... and black people are still afraid” of talking about the massacre.
___ 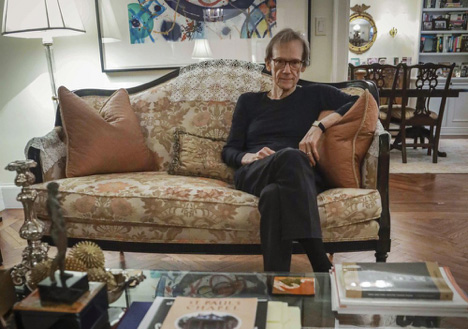 In this July 23, 2019, photo, poet and author J. Chester Johnson sits at his home in New York, as he talks about a 1919 massacre of African Americans in Elaine, Ark. Johnson believes his grandfather took part in the Elaine massacre, an infamous chapter in the “Red Summer” riots that spread in cities and towns across the nation. (AP Photo/Bebeto Matthews) 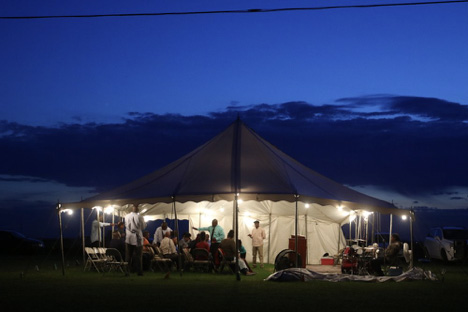 In this June 14, 2019, photo, residents participate in an Evangelical tent revival in a large field in Elaine, Ark. The effects of the violence during the summer of 1919 and aftermath endure today. Elaine is still highly segregated: White residents live predominantly on the south side and black residents on the north side. (AP Photo/Noreen Nasir)