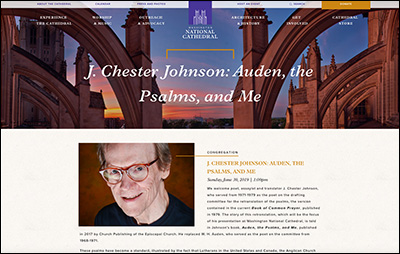 J. Chester Johnson: Auden, The Psalms and Me
We welcome poet, essayist and translator J. Chester Johnson, who served from 1971-1979 as the poet on the drafting committee for the retranslation of the psalms, the version contained in the current Book of Common Prayer, published in 1979. The story of this retranslation, which will be the focus of his presentation at Washington National Cathedral, is told in Johnson’s book, Auden, the Psalms, and Me, published in 2017 by Church Publishing of the Episcopal Church. He replaced W. H. Auden, who served as the poet on the committee from 1968-1971.

These psalms have become a standard, illustrated by the fact that Lutherans in the United States and Canada, the Anglican Church of Canada, and the Scottish Episcopal Church have all adopted this American version of the psalms for their respective worship books and services; in addition, these psalms are approved for use by the Church of England and were adopted in England as the preferred translation for Celebrating Common Prayer, the pioneer in reforming the structure and style of the Daily Office.

Other recent books by Johnson are St. Paul’s Chapel & Selected Shorter Poems (2010) and Now And Then: Selected Longer Poems (2017). He has also written extensively on race and civil rights, composing the Litany for the national Day of Repentance (October 4, 2008) when the Episcopal Church formally apologized for its role in transatlantic slavery and related evils. Johnson just completed Damaged Heritage: From The Elaine Race Massacre To Reconciliation, a memoir and commentary on racial enlightenment and racial reconciliation; his agent is now approaching publishers with the book.