Poem by J. Chester Johnson Embedded in DeWoody Art for Show at The Church of the Heavenly Rest

On the evening of January 10, 2019, an exhibition of eight art pieces was unveiled, reflecting the joint creative efforts of paired writers-artists to celebrate the renovation of Darlington Hall at The Church of the Heavenly Rest in New York City. The poet and writer J. Chester Johnson was paired with the artist, James DeWoody, whose works appear in collections of the Metropolitan Museum of Art, the National Gallery of Art in Washington, D. C., the Library of the Whitney Museum of American Art, and the Library of Congress, among other venues. Here is the piece with words by J. Chester Johnson: 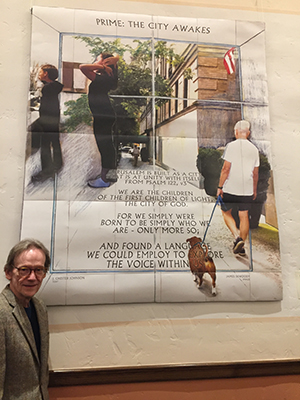 The overall goal of the exhibition was to present pieces that illuminated the canonical, eight hours of the day in a current, urban environment, starting with Matins and ending with Compline. The Johnson/DeWoody piece illustrated the hour of Prime, the hour of awakening – in this presentation, the City’s hour of awakening. For those who may be unable to read Johnson’s triple, linked haiku embedded in the piece as shown in the photograph above, here is the poem:


We are the children
Of the first children of light,
The City of God.

For we simply were
Born to be simply who we
Are – only more so;

And found a language
We could employ to explore
The voice within us.


DeWoody wrote these words to describe his vision in putting his part of the joint piece together:

“Through Chester’s text, I saw our city as a new Jerusalem, full of possibility and hope. Though from disparate lands and creation stories, our citizens can all embrace the message of Love and Peace. We awake each morning and engage with life, taking steps that define us, interacting with each other in ways that bind us to a common Good. That Goodness is the essence of God. We find it in each other and in the promise of sunlit days.”

In a parallel composition, Johnson describes the approach he pursued in composing the words:

“Prime, the third canonical hour, occurs at the influx of morning when the City teems with unity – by purpose and energy. While I’m reminded of Augustine’s The City of God and Charles Williams’ The Image of the City, I recall especially a line from Psalm 122: ‘Jerusalem is built as a city that is at unity with itself.’ Within the City, I encounter the disparate, but unified voice of others with my own, and out of this chorus, I wrote a triple, linked haiku.”