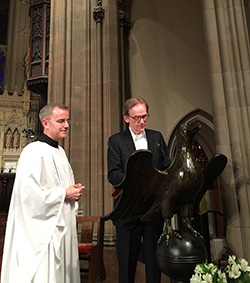 J. Chester Johnson reads poetry at Deborah Danner's memorial. On November 3rd, 2016 at the memorial service for the poet Deborah Danner, the African-American woman who was shot and killed in her apartment by New York City police on Tuesday, October 18th, J. Chester Johnson recited pieces of Ms. Danner's verse. The violent manner by which Deborah Danner met her death was publicized, both locally and nationally, and has caused an uproar among many New Yorkers, reflected in numerous marches, calls for increased vigilance and more restrained use of force by the New York Police Department, and a myriad of public statements by many elected officials. At the memorial, Johnson read a sampling of Danner's well-structured and melodic lyrical verse.