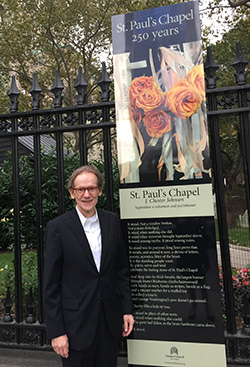 J. Chester Johnson stands beside the all-weather display of his iconic poem, "St. Paul's Chapel," that has been the memento card since 2002 at the Chapel, located in downtown Manhattan; the Chapel miraculously survived the 9/11 attacks and became the relief center for the recovery workers at Ground Zero. This large display of the poem has been placed on the fence directly across the street from the site of the former North Tower, which received the first attack by the terrorists on the morning of September 11, 2001. Johnson's poem has been published around the world and translated into many languages; one literary group in Italy has recognized "St. Paul's Chapel" and Emma Lazarus' "The New Colossus" as the poems that demonstrate the American spirit.