A Review of “Auden, the Psalms, and Me” – Posted On The Florida Diocese of the Episcopal Church

A Review of Auden, the Psalms, and Me Has Been Posted On The Website of the Florida Diocese of the Episcopal Church. An Introduction To The Review By The Diocesan Bishop, the Rt. Rev. Samuel Johnson Howard, Precedes The Review. Read The Review Below. 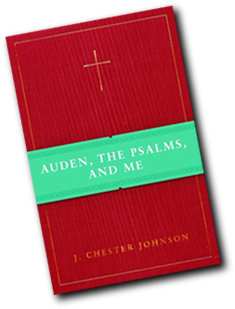 Chester Johnson and his wife Freda have been dear friends to Marie and me for over 20 years. We first met the Johnsons at Trinity Church in New York City where I was Vicar. Chester and Freda were active members of Trinity, and Chester served for a number of years on the Vestry.

Born in Tennessee and raised in Arkansas and Harvard-educated, Chester has spent most of his life in New York City in the world of finance.

Chester is a gifted poet, essayist and speaker. In the 1970s, Chester served alongside the noted poet W.H. Auden as one of the two poets on the drafting committee which retranslated the Psalms for our Book of Common Prayer. In the years since, Chester has authored a number of volumes of poetry. I am particularly fond of one poem which relates to our time together in New York City: "St. Paul's Chapel." This wonderful poem has been used by Trinity Church and its neighboring St. Paul's Chapel for distribution to those visiting that historic church which was the site of important rescue and relief work during the months following the 9-11 attacks.

I am delighted that Chester has recently visited with us in the Diocese of Florida and spoke at our Cathedral about some of his recent books. I am grateful, too, that Owene Courtney has written the following review of Chester's most recent book, Auden, the Psalms, and Me.


A Book Review of Chester Johnson's Auden, the Psalms, and Me

Self- described as "bubbly and slightly mercurial" in his 20's, Chester Johnson still charms and fascinates when he discusses his experience on the drafting committee for the 1979 retranslation of the Psalms contained in the current edition of the Book of Common Prayer. If you have ever wondered why the psalms in our prayer book today are slightly different, more accurate and sometimes more lyrical than the ones in the bibles you read, Chester's book Auden, the Psalms and Me is a must read.

In his book, Chester tells the story of how his 'bubbly and slightly mercurial self' became involved with the drafting committee for the retranslation of the Episcopal psalms, and then how he took the place of esteemed 20th century British/American poet W. H. Auden on the committee "at the grand old age of twenty-six, being at least twenty years younger the next youngest member." By no means dry or theological, this delightful book tells the story of a humbly bright and clever young poet who unabashedly offered his services to a more senior and experienced group of scholars, only for them to discover he was the perfect person for the job. Students of Church History and the prayer book will enjoy it for this reason.

Chester explains the reasons the retranslation was so necessary and appropriate as well as W. H. Auden's ambivalent feelings about the revision of the Book of Common Prayer. He also includes correspondence with W. H. Auden, which reveals the origin of those feelings as well as a better understanding of Auden's "friends and influences, mirrored in the realms of literature, literary criticism, and theology." Students of literature, particularly 20th century poetry, will enjoy it for this reason.

As a scholar and a poet, Chester carefully acknowledges the literary devices inherent in the psalms, ones which elevate them to an eloquently poetic level and had to be preserved in the retranslation. Poetic devices from chiasmus to parataxis, possibly not known by name, will be recognized by readers as what makes the language of the psalms so beautiful. Poets and writers will enjoy the book for this reason.

My favorite part of the book is toward the end when Chester compares the Coverdale translations with his retranslations and explains why the nuances of word, punctuation, and syntax change were so important. Having been a young adult in the church as the "new" prayer book was introduced, I was shocked with how poorly received it was and how offended people were by the changes. I worshiped in a church where the clergy taught the 'whys, hows, wheres and whats' of the changes, and consequently the people were less offended. What Chester has done with this book by continuing that explanation is to offer pray-ers and worshipers a gently humorous and humble, yet very scholarly, explanation of why the changes were made and how they make a significant difference in our prayer life.

Whet your appetite for this book by reading the psalms in your bible and then in your Book of Common Prayer. Note the changed words or syntax and then see what Chester says about them. As Chester says, "None of our revised verses have come back to bite us like other revisions have," referencing another translation of Psalm 50 which says, "I will accept no bull from your house" rather than the BCP translation "I will take no bull calf from your stall." Chester Johnson is clever and humble and thoroughly delightful, just like his book.

Auden, the Psalms, and Me(2017, Church Publishing) is available at the St John's Cathedral bookshop and via Amazon.